Still a bit more weathering to do. I’m taking it slow on the weathering. I have a habit of either doing way too much or way too little. Hopefully by going slow and doing it little by little I can achieve the right balance. I imagined him in a desert setting and I’m trying to make it look like the dirt has been caked on. Again without overdoing it.

The decals came from Industria Mechanika’s Hopper Decal Sheet. It’s a cool set.The black decal on his chest is a Grasshopper. The way I imagined him was a bit like the character in the old Kung Fu TV show. Wandering around and protecting the weak. Anyway, I remember his teacher always called him “Grasshopper”.

After I applied the decal on his chest I kind of got carried away with the gloss seal over it. I had to go back and sand it down because the paint in those areas wasn’t matching the rest of him. While sanding I took off a little too much of the detail. Not a big deal and it actually looks cool.

I still need to paint the small tank that will go on his back as well as his staff. I also have a hose/pipe that will run from the tank on his back to his chest. 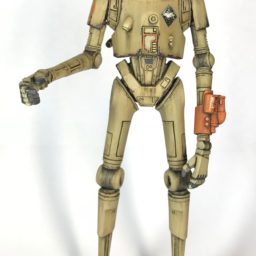 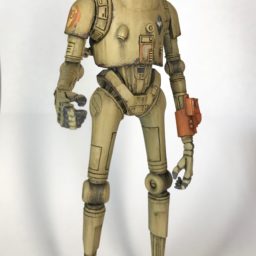 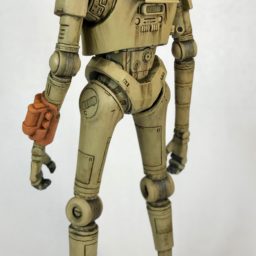 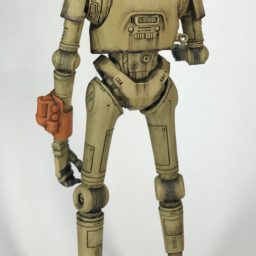 Other posts for this project: