I was going through my parts box the other day and came across some really cool pieces that I’ve been wanting to use. Among them were a couple of tank kits. I started toying with them, trying different configurations to see what would look cool. I didn’t have any intention of starting a new project, I was just wanting to experiment. I thought that if something looked cool I’d document it for a future project.

I went with it and decided to make it a challenge for myself. I’ve never really built something from scratch: measuring, cutting and all that. I usually use bits and pieces and build around them, using putty to fill in the gaps. I use putty a lot. Love the stuff, but I rely too much on it to cover my deficiencies in cutting and measuring. So I decided no using putty (Aves, Milliput, etc) this time, only plastic. (Although as you can see from the photos I still went a bit overboard on the putty to fill gaps).
My second challenge was to make lots of surfaces for adding detail. This is the largest project I’ve ever started (over a foot long) and so I have a pretty big canvas to work with.

I used the upper hull and turret from a tank kit for the top deck. Of course, as I tend to do, I just turned the turret around and wa-la something different. I don’t remember what type of tank it is. I know it’s a Tamiya kit and has really good detail. I used another tank turret for the lower portion of the ship. I’ll add lots of details here in the recessed areas.

I thought about how I could make the ship flying but decided on adding landing gear so I could build a diorama around it. Landing gear from an old Millennium Falcon kit fit the bill perfectly.

A week and a half later I have the base built. Just a few more things to add and then I’ll move on to adding details. I’m going to have fun with this. 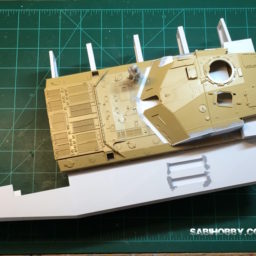 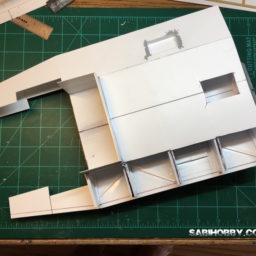 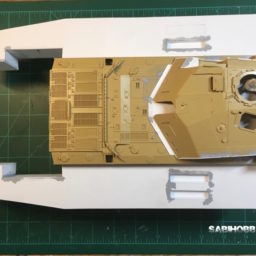 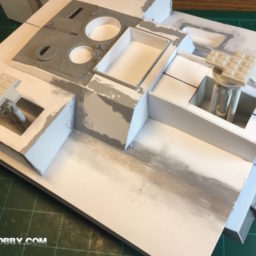 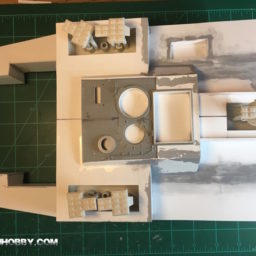 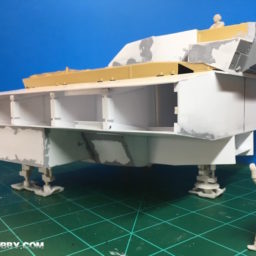